In conversation with
Dr Christo Wiese 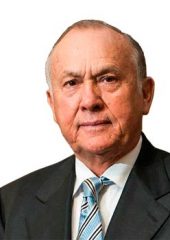 FDI Spotlight: You have been quoted as saying that “All successful businesses have one thing in common: they all started out small”. What challenges did you face and overcome when you first launched your own business?

Christo Wiese: We faced the same challenges that all small businesses face initially, which is primarily a lack of capital. At the time, the only difference for South African SMEs was that these challenges were compounded because we had a strange political setup.

Laws during the Apartheid years precluded us from opening businesses in certain areas, which were unfortunately where most of our customers lived. As a way around this, we formed subsidiary companies where the majority shares were held by the designated groups for particular areas. While this never constituted a large part of our business, it was a South Africa specific issue. The challenges for small businesses are usually the same, such as scepticism and lack of capital. However, all successful businesses overcome these hurdles.

Investor confidence in South Africa is currently extremely low, and it is often said South Africans need to be pushed to the edge of the cliff before fighting back and resolving the issues they face. Do you believe that South Africans are at the edge of a cliff once again?

Christo Wiese: I think it is fair to say that we have that trait; we will push the envelope as far as we can before waking up and doing something about a situation. The positive side of this is that, in the past, we have woken up and averted a disaster.

I am an incurable optimist, and I believe in being a committed African. People should always accept that caveat, no matter what I say; I am by nature an optimist and by choice a committed South African and African.

General Jan Smuts, a well-known South African statesman, said 100 years ago that South Africa is a peculiar country where things are never as good as they should be, but never as bad as they could be. I believe that that is the perfect description of the country. I am never despondent about South Africa. However, I am deeply frustrated. People need to only make relatively small adjustments to their way of thinking and how they approach our current situation to improve most things in the country.

What do you believe needs to be the focus to ignite the African economy?

Christo Wiese: I believe that we need to fix how we trade with each other. Intra-African trade is less than 20 percent, and it is deeply frustrating that we do not trade more with one another. There are many reasons for this, such as the red tape and bureaucracy around transporting goods across the borders and getting work visas for employees when you want to establish a business. It applies to every SADC country in Africa with almost no exception.

We are a retail organisation and, apart from us, there used to be virtually no formal retail establishments in the countries to the north of South Africa. This applies to other industries as well, and therefore there are little to no skills in these countries. However, an organisation such as ours invest capital, increase the quality of life for the people, train and employ locals, and we buy products from that country. It is a fantastically mutually beneficial situation.

However, it is unbelievably difficult to get work visas for the people we have to send to do the skills transfer. There is also a lot of corruption at the borders; the more regulation you have, the more corruption you have.

Emerging economies seem to have this intense love affair with regulation, which boggles the mind. Here is an example: one of our businesses, Shoprite, offers consumers credit finance, which means we supply them with credit and they can buy products on credit. Out of 500 accounts, the credit regulator found nine instances where we had extended credit recklessly under their regulations. As it is a punishable offence, we were fined R1 million. However, by the time they levied the fine, those nine debtors had already settled their accounts in full.

My problem with this is that those who issued the fine consider themselves better qualified to decide as to whom the company should lend money to than the company whose livelihood depends on not lending money to those who cannot repay. The example of Shoprite shows the toxic impact of the need to control everything; in South Africa and many other African countries, it is the divide. Advocates for the regulation of everything often forget that even though they trust the people to vote for the governing bodies, they do not trust them when it comes to deciding if they can pay a loan back.

It is important to remember, however, that this happens everywhere in the world, not just in Africa. People often say that recent developments in South Africa are making it difficult to paint a positive picture of the country; I always ask ‘compared to what?’

What would be the impact and potential for growth for a company such as Shoprite in an environment where African nations trade more with each other?

Christo Wiese: Shoprite started 23 years ago, and we moved across the Northern border of South Africa into countries where South Africans were not welcome. However, we have built the largest retail group on the African continent, and we did it by dealing with the challenges.

We have already broken the ice, and we are on the ground training people and trading with them; therefore, in terms of Shoprite specifically, I do not see that an increase in intra-African trade will have a major effect.

However, the larger effect of opening the borders and increasing trade will be tremendous. We need to make an African Union, similar to the existing European Union. This is a conversation that has been raging for the last 23 and, to be fair, there have been breakthroughs. However, progress has been painfully slow.

I have sympathy for the South African government regarding its role in Africa. South Africa suffers on the African continent from the same handicap that the United States suffers from in the Western hemisphere. It is the handicap of being the big brother. On top of that, South Africa has a large contingent of white-skinned Africans, which in my view has led to envy and distrust.

What we as Shoprite do, when we enter a new country, is that we speak with the political leaders first. We show them what we do, what we want to do in their country and what we have done in other African countries. Doing this has led to us being welcomed somewhat more than most other South African companies.

My approach is that if you want to do business in Africa, you are the one who has to adjust to the rhythm of Africa. Like all other continents and countries, Africa has its own ways, cultures and manner of doing things. You cannot expect them to change for you and to fit in with how you do things.

What does the existence of initiatives such as the SA SME Fund and the CEO Pledge say about the South African character and South Africa’s current status?

Christo Wiese: I think it tells you that despite a lot of bad mouthing in certain circles, South African business has never been unwilling to step up to the plate. The BBB-EE initiative is a good example: from 2005 up to 2015, only the 100 largest JSE listed companies created BBB-EE initiatives. These initiatives generated wealth worth R315 billion and went towards previously disadvantaged South Africans. Yet, people keep talking about getting rid of white minority capital and that they do not see the radical economic transformation happening. What has been done, such as the generation of the R315 billion, is completely ignored.

There are so many lies being told and fallacies perpetuated, such as the issue around land ownership in South Africa. The fact is that no one has ever done a land ownership audit that focuses specifically on race, so there is no way of knowing what the situation really is.
Personally, I like to follow what the United States Senator Daniel Moynihan said: “Every man is entitled to his own opinion, but not to his own facts”. Africa, especially, cannot afford to misread or overlook the facts.